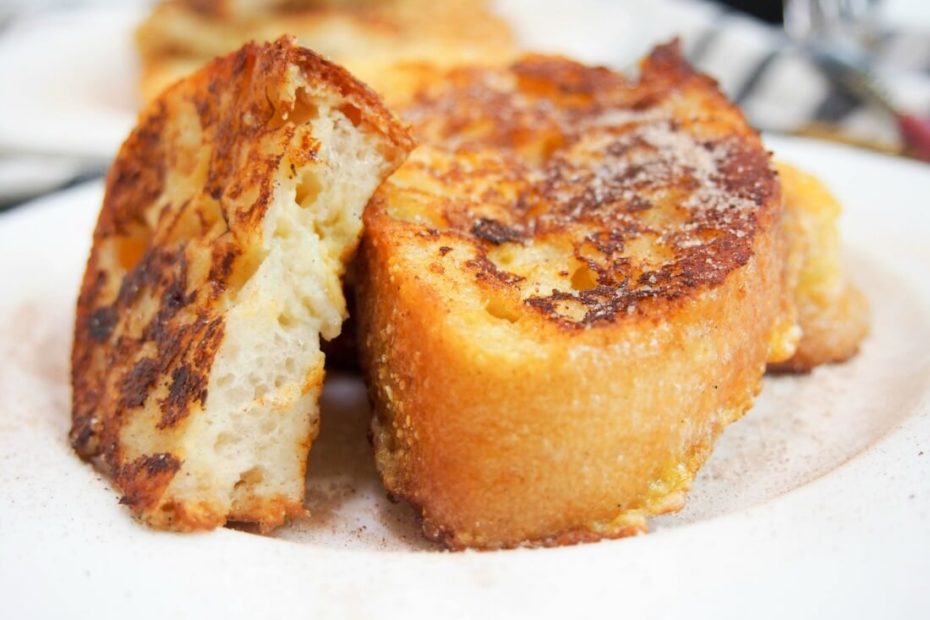 Spanish French toast, torrijas, is traditionally served during Easter, but there’s really no reason why you shouldn’t enjoy this tasty treat any time of year. Soft inside, crisp outside and gently and warmly flavored, it’ll be love at first bite.

A few of us are celebrating French toast today because, well, French toast! What’s not to love? It’s a nice quick and easy thing to whip up that the kids love. We have even been known to have it for lunch now and then when hunger cries.

If you manage to spend just a little more time, however, it can easily go from good to great, like the baked banana French toast or raspberry stuffed French toast I have made in the past.

For something so simple, it can have quite a few variations, as you can see and there are more to dive into below. For my contribution, I debated trying something creative, but I wasn’t getting any particularly great ideas.

I considered recreating the French toast I had in Laos for breakfast – even years later, I still remember it was really good. It may not be quite as traditional as larp, ​​Laos chicken salad, or Luang Prabang salad/Laos salad, I’m sure, but still delicious. But then I’d have to try to recreate some of the tamarind jam and I think mango too to go alongside, and I didn’t quite have time for it. Instead, I decided to go for something simpler, more traditional, yet different – Spanish French toast (torrijas).

How to make torrijas

As with many traditional recipes, there are various ways of making this – in fact some versions soak the bread in sweet wine, and toppings vary from honey to cinnamon sugar, as I have here. But the principle is much the same nonetheless. I’ve adapted from a couple recipes, including this one.

Unlike your more typical French toast, torrijas is made by infusing and sweetening milk which you then soak the bread in before dipping it in beaten egg. You don’t mix the egg into the milk directly. After the bread has soaked, dip it in egg before frying it in oil. The result is an incredibly soft filling with a gently crisp outside. If you’ve ever disliked French toast for being a bit too eggy, you won’t have that complaint here.

One note on the bread – one thing that is consistent is that you should use slightly stale bread. In fact, the recipe was developed many centuries ago as a way to use up old bread. Even pretty hard works as I have tested out. In terms of what kind, white is probably best and not too dense nor too many holes.

I used part of a baguette (had to reject some for the too many holes thing) and a slice of sourdough. Interestingly, we all preferred the baguette, I think because it was slightly less dense. But who knows for sure – go with what you have or try different kinds and see what you like best. Because I think you’ll want to make this more than once.

This Spanish French toast went down really well in our house, including leftover eaten cold in the park. While it’s traditionally served for Easter, I think it definitely deserves a place on the table more often.

Spain’s version of French toast is comfortingly soft inside and gently crisp on the outside. So delicious!

See the other French toast ideas being shared today: