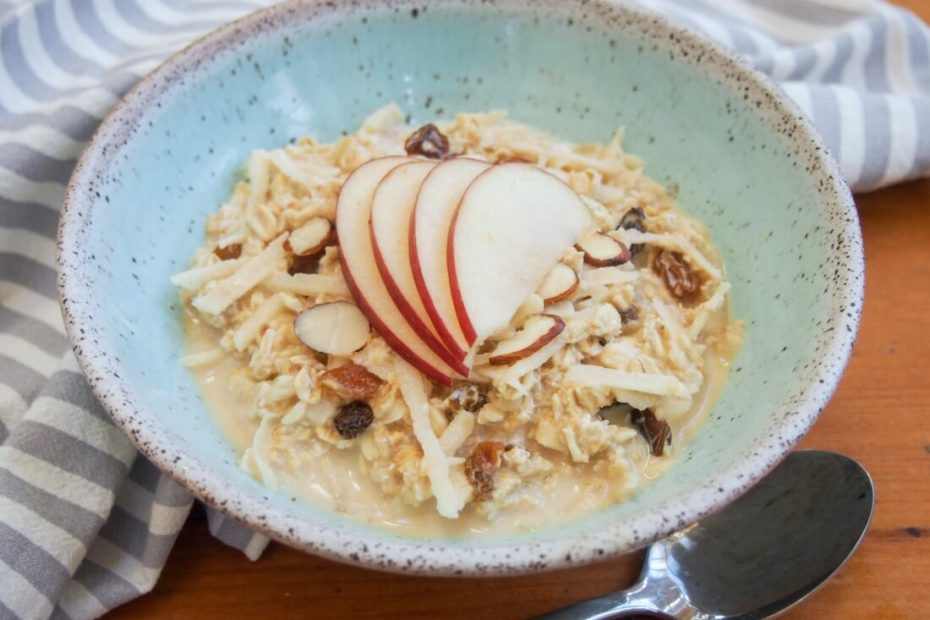 Overnight oats have become a common breakfast idea with tons of variations – but what about the original idea they are all stem from? Swiss Bircher muesli is a delicious combination that’s both creamy and fruity. It’s a healthy, easy breakfast you need to try!

Much as I try, I am just not naturally a morning person. It can sometimes take me a little time to get going and I definitely work better going on auto-pilot to get things ready.

As a result, anything easy or made ahead really helps. Banana oatmeal is one of our go-tos, and I love this Swiss Bircher muesli as the weather gets warmer as well. It’s full of flavor, easy and delicious.

The origins of Swiss Bircher muesli

Overnight oats seem to be making the rounds quite a bit at the moment as an almost-new phenomenon. However, the idea has in fact been around for a good century or more thanks to a Swiss doctor/nutritionist Maximillian Bircher-Benner.

He created it as a way to get his patients to eat more fruit. When you look at this recipe and hopefully try it, think of the beautiful mountains of Switzerland and all that goes with it.

This bircher muesli may not look much, but it is simple and delicious. The oats are smooth and the apple has a slight crunch. The whole think fresh and wonderfully healthy feeling. The images of goat-herders, lakes and mountains are easy enough to picture alongside.

Unfortunately this idyllic tranquility was a far cry from what was going on in our house when I first shared this recipe.

The side effects of winter

When I first shared this recipe almost exactly 3 years ago (how did that happen?!), it had been quite the winter. We’d had excessive amounts of snow, and sadly it was far from away by the first week of March.

It was doing this weird and annoying thing earlier of snowing some more (as if we needed it), then raining only a few hours later, then warming slightly and melting so there was some delightful slush all over the place. Yuck.

In the midst of all this, our roof was apparently not too keen on the snow and ice that had held on for the last month and we had the odd drip down on the inside of our windows over recent weeks. Not great, but not too drastic.

One morning, however, we had a drip elsewhere that was a much bigger issue – coming through the smoke alarm. Unsurprisingly the alarm soon went off. I say ‘alarm’ but actually all four or five that we have in the house went off and there was no stopping them without taking out the batteries and turning off all the electricity.

By which time, I felt like I was going deaf and my son had decided he didn’t want his cereal after all but instead ate my toast. Thankfully, he didn’t take my coffee or there really would have been a problem.

Now somehow I must have had some foresight this would happen. I had soaked some oats the night before to make this Bircher muesli. I thought I would have it as a bit of a snack or part of lunch (I had been having some more breakfast-like lunches recently).

Instead, they were to become my breakfast and a pretty great one at that. So much so that I almost relaxed and temporarily forgot about all that was going on.

How to make Bircher muesli

Bircher muesli is really easy to make. You simply soak the oats overnight, add some grated apple then additions as you prefer. I have just added some raisins and a little cinnamon and yogurt since I soaked the oats in apple juice.

Some people soak them in milk, others soak them in water. I find apple juice gives them a lovely freshness and sweetness that means there’s no need to add any other sugar.

When you finish them off, it will seem like quite a lot of apple compared to the oats, but it is meant to be that way. That is partly what makes it so tasty. You still taste both but it is fruitily fresh.

Tips for the best Bircher muesli

We did, thankfully, get the electrics checked and all was fine. And while I certainly wouldn’t wish the same circumstances again, it did have an upside. It was a nice excuse to have this Swiss Bircher muesli as a really tasty breakfast that I hadn’t had in a while.

Hopefully you won’t have such a dramatic situation, but I would really recommend you give these a go. And think cow bells, not smoke alarm sounds, as you do.

Try these other overnight oat recipes:

Bircher muesli is a tasty, healthy breakfast that’s so easy to prepare the night before and finish off in the morning.

This post was originally posted March 2015 and has been updated primarily with new photos.