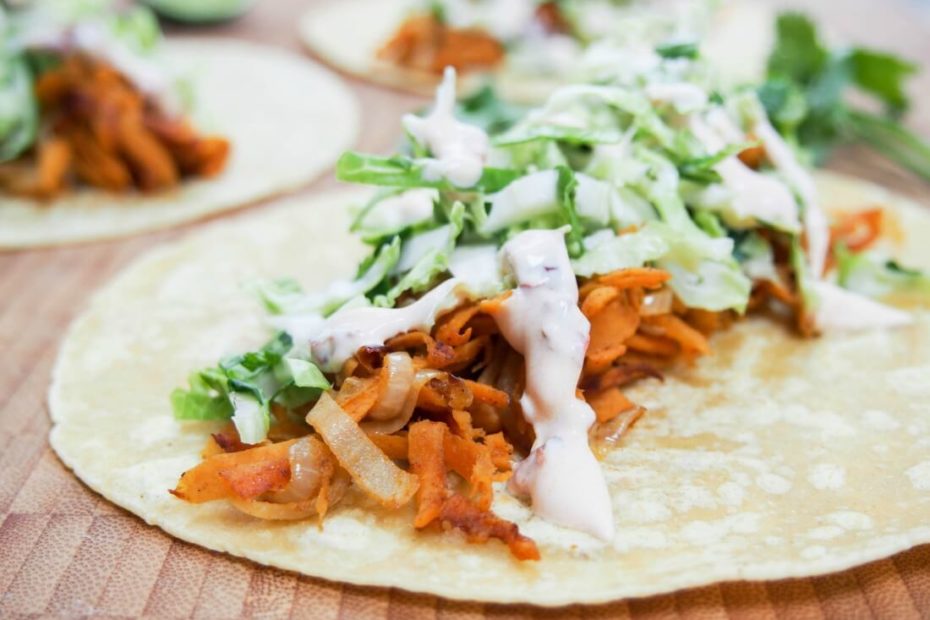 Tacos, to me, are very much warm weather food. So I think I made these sweet potato tacos as much to tell myself it’s spring, even if the weather outside isn’t totally cooperating.

Our snow pile has at least largely melted, but the last couple days it’s fleeted between sleet and rain. Not exactly encouraging spring fever.

But really, I think I would use any excuse to have these tacos again as they were that good. Quick to make, great flavors and both vegetarian and pretty healthy, if you needed another excuse.

One of the fun things with tacos is you can play around with the filling as much as you like. You can keep it traditional, like pork carnitas with tomatillo salsa verde or chicken mole.

Here I have kept things relatively simple, though not exactly traditional, but everything works so well. The sweet potato is warm, gently spiced and soft. The slaw is crisp and zesty and the chipotle cream is smooth with a kick. All wrapped up in warm soft tortillas, they are delicious in every bite. You won’t even notice there’s no meat (if you have a dedicated carnivore around).

How to make sweet potato tacos

While there are three different things in the filling, they are all really easy and quick to make. The slaw just takes a quick few chops, add in some lime juice and seasoning then it’s left to mingle. Then grate the sweet potato, slice the onion and saute both for a few minutes with cumin and paprika to get nice and soft.

Meanwhile, chop up the chipotle pepper and mix with the sour cream and warm the tortillas. After that, it’s a quick assemble and serve them up.

Why a Brussels sprout slaw?

The slaw is made with Brussels sprouts rather than the more typical cabbage for a few reasons – first, I hate finding part of a cabbage in the fridge after a week or two of me not getting round to using the rest of it (which is often inevitable) whereas you can easily buy a small amount of sprouts.

Secondly, raw Brussels sprouts have a nice sharpness which works really well with the rest of the flavors, in particular the slight sweetness from the sweet potato.

These sweet potato tacos make for a delicious lunch, appetizer or even a light main meal, maybe served up with some rice and beans, fried plantain or a salad. They don’t take long to make but have that complexity of the mingling flavors and textures that they seem like they’ve taken much longer.

I for one think I’ll be making them a few times over the coming months as a nice easy, light and delicious lunch. Hopefully the sun and warmth will come to join me soon. In the meantime, I’ll happily immerse myself in warmth through my taste buds with these. Give them a go too; you won’t regret it.

Try these other tasty taco recipes: