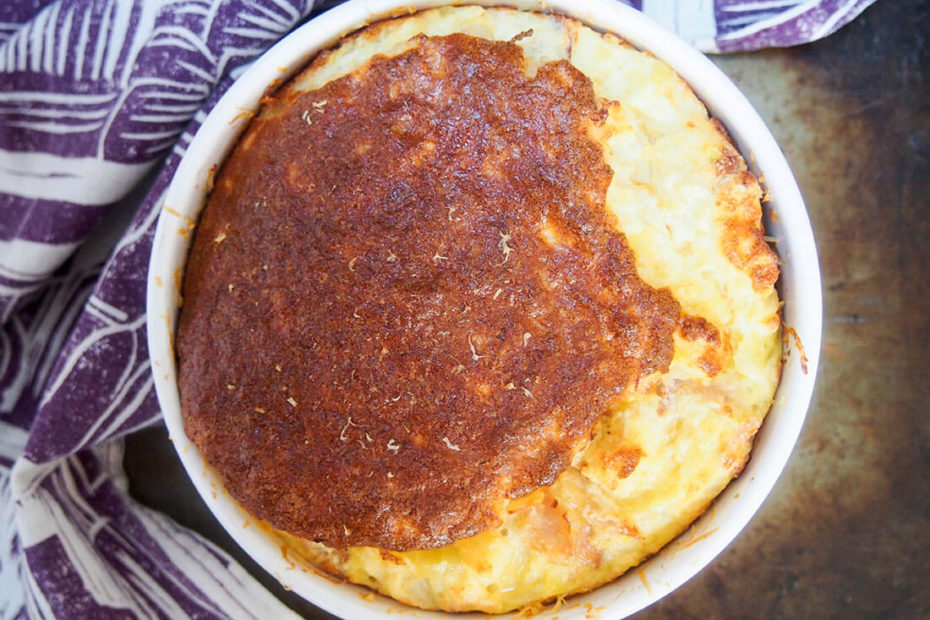 This speck, potato and cheese souffle makes relatively humble ingredients into something special and delicious, with a lovely smoky speck flavor coming through.

I think I have mentioned before that for more years than I can remember as a child, we went to Austria in the summer on vacation/holiday. My parents have always loved hiking and being able to hike in beautiful mountains was a bonus. Especially when you added in huts you could stop off in for some food and a drink along the way.

Funnily enough, I preferred it to the generally soggy walking and eating options in Scotland too. I do love Scotland, but walking in rain or through bogs is all too common a feature.

One of the main areas we went to in Austria was East Tyrol which is near the border with Italy.

We went into South Tyrol, just over the border, a couple times and it’s an interesting mix of some things clearly more Italian, others more like their Austrian neighbors.

One South Tyrolean tradition they share with Austria (and Southern Germany) is making and enjoying speck. It’s a tasty cured ham that I remember enjoying many times.

What’s the difference between speck and prosciutto?

Speck uses the same basic ingredients as prosciutto ie ham, salt and mountain air to dry it. However the main difference is it is lightly smoked. I’d say it has a slightly stronger flavor as a result and it is a little drier. There’s a definite smokey taste which is delicious.

You can use speck in a range of recipes to add that touch of flavor. A classic is German green beans, speckbohnen, but it would be great in a quiche, for example. It is also tasty just thinly sliced ​​and eaten as an appetizer/snack.

This souffle uses just enough speck to get it’s lovely flavor. Then otherwise, it’s a very humble set of ingredients. Yet they come together to make something delicious and quite special-feeling.

I first made a leek and potato souffle a few years ago. I found it on a card I picked up in a supermarket and I was pleasantly surprised by how tasty it was. If I remember rightly, I think it may have been this Delia Smith recipe or at least similar.

It’s tempting to say it was tasty despite the ingredients, but that seems a bit harsh on eggs, potatoes, leeks and cheese. But you know what I mean. They are comforting, yes, but not typically fancy-feeling.

However when they’re put together as a breath, that’s just how they feel. I wanted to build on that with just that bit more flavor with this speck version, and I have to say it worked so well.

Possibly not surprisingly, but one of the reasons this savory souffle makes the ingredients seem that bit more special, is there’s a little more effort involved. But that said, it’s only a couple more steps and easy when you follow a few simple tips.

See how it comes together in the short video!

Tips for a successful breath

I know this might all sound off-putting, but really these are just things to keep in mind. And if you do, you really shouldn’t have any problems creating a great breath.

This speck, potato and cheese souffle has such great flavors and makes a lovely meal that really could work at any time of the day. You could have it with salad, bread or on it’s own.

It has a lovely comfort factor, without being too heavy, and the flavors are delicious. Give it a try and you’ll see what I mean.

Try these other comforting dishes:

A deliciously comforting dish that makes something special out of simple ingredients.

This post has been updated primarily with new photos.

When I first made this recipe, I received samples of Speck Alto Adige PGI ham for review and recipe development but was not financially compensated. All opinions are my own.