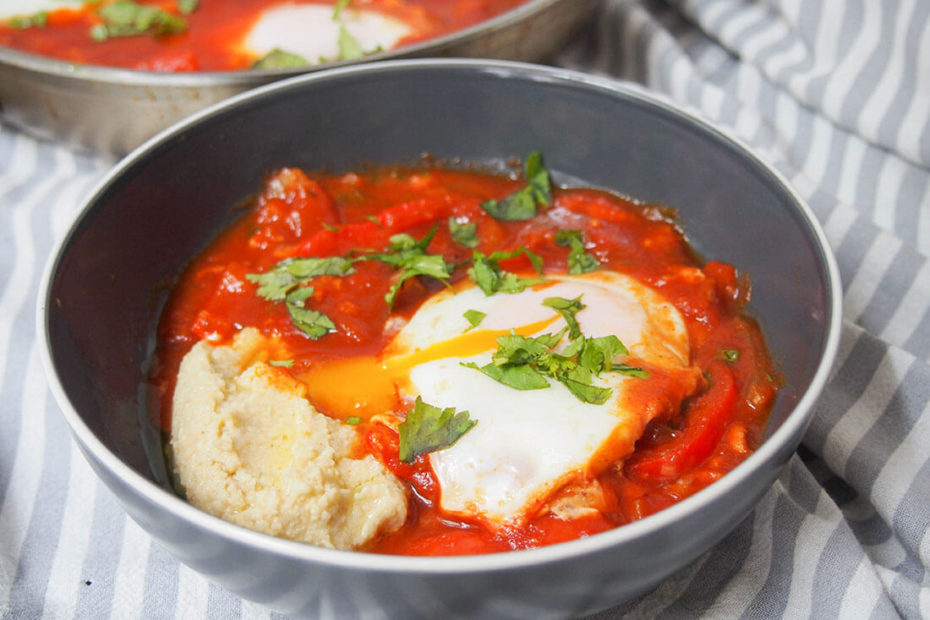 What happens when two already tasty Mediterranean favorites collide? You get one deliciously comforting dish! Shakshuka hummus is perfect for brunch, lunch or anytime.

Before we went to Israel around 18 months ago, I naturally did a bit of digging on what we should eat. Many dishes were already familiar, like hummus and falafel, but some I hadn’t necessarily had in quite the way we enjoyed there, like Israeli salad and roasted eggplant with tahini.

As I was researching, I came across shakshuka hummus, apparently a bit of a local favorite in the Tel Aviv area, where we were going. I couldn’t decide whether it was going to be amazing or a bit weird, but I knew I had to try it.

What is shakshuka hummus?

Shakshuka hummus is pretty much exactly what it sounds like: shakshuka on top of hummus. Not familiar with those? Well hummus is a spread/dip made primarily from chickpeas, mixed with tahini (sesame paste), olive oil and lemon juice.

Shakshuka is often credited as being originally from Tunisia, but is a firm favorite in Israel and increasingly elsewhere. The base is made with peppers, onions, tomato and then usually some herbs and/or spices and then eggs are poached in the sauce.

We have loved shakshuka for years, and I’ve made a few variations, including shakshuka with meat and green shakshuka. One of the great things about it is you can make extra sauce and freeze it, ready to just defrost, warm it up then add your egg.

Plus, shakshuka is just ridiculously tasty and comforting.

On our trip, I very nearly didn’t have shakshuka hummus as I didn’t see it anywhere until right at the end. But when I saw it, it was first on our order, no matter whether it went with anything else or not.

You might be wondering why I thought it might be weird. Well, I have a bit of a thing about hot and cold things together. I’m never quite sure about it. But here the trick is to have the hummus at room temperature so the contrast isn’t as big.

Then, the smooth, creamy hummus and runny tomatoey shakshuka intermingle. And once you then break open the egg yolk, it’s all one mushy delicious mouthful.

How to make shakshuka hummus

While it takes a little time, it’s a very easy dish to make. It’s also great for preparing part of it ahead to do just a final cook when you need it.

If you’re looking for one deliciously comforting brunch that’s just that little bit different, shakshuka hummus is a great choice. Great flavors, and all perfect for dipping some bread into.

Try these other comforting brunch ideas:

Just what the name suggests: shakshuka hummus is the egg in pepper and tomato sauce over hummus. So comforting and tasty!

Instead of chunkier chopped tomatoes, you can also use finely chopped or tomato passata, as I used here since that’s what I had.