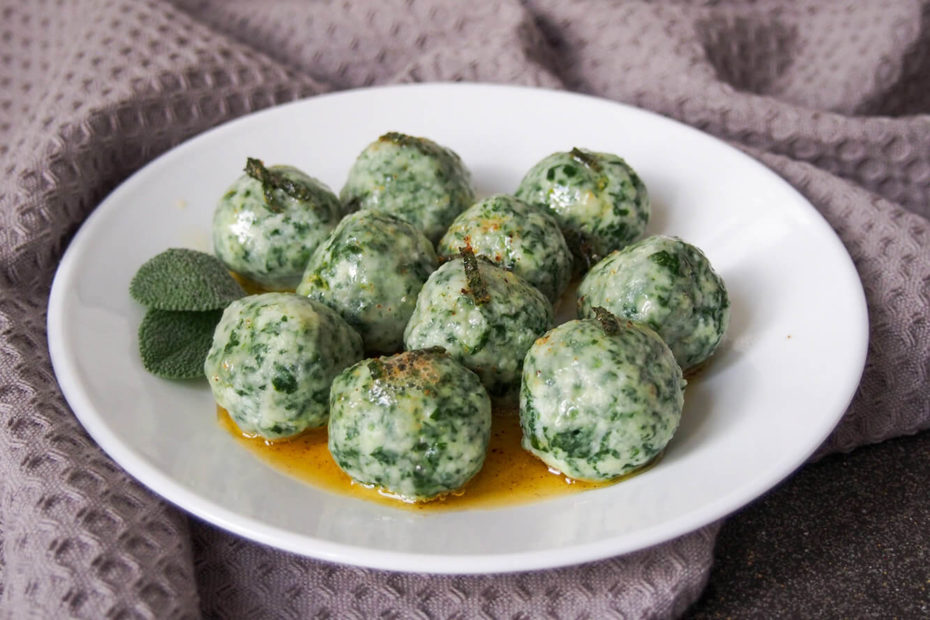 Ricotta and spinach gnudi are a little like gnocchi without the potato. They’re light, cheesy and incredibly comforting and delicious!

Gnocchi have been one of my elder son’s favorite meals for many years now. It was one of the first meals he gobbled down faster than us, and ate just as much. His younger brother has never been quite such a fan, though is getting more in to them now he can help.

Earlier attempts to get the kids to help make gnocchi tended to end in very messy hands and not a whole lot of help. However these days, I can get them to do a pretty good production line with me (as they did with some beet gnocchi not long ago). Which is just as well, as we need quite a lot these days.

Recently, I was looking to try something a little different on the theme and came back to gnudi. I made them a couple years ago, but somehow got out of the habit. I don’t think the kids will be letting that happen again.

Gnudi come from Tuscany in Italy. The name literally translates as “nude” as they are in effect like the filling for ravioli or other filled pastas without the pasta covering. They are sometimes called “malfatti” meaning “malformed”.

Neither name is particularly kind, really, and the simple ingredient list doesn’t really give you a true sense of how wonderfully delicious these little bites are either.

All gnudi use ricotta as the base ingredient, with egg to hold them together and typically some parmesan or pecorino for additional flavor. You use some flour, but not that much so the cheese flavor dominates. Some, like these, also include spinach. It adds a nice flavor and texture (and the healthiness balances out all that cheese, I like to hope!).

I won’t lie, these take a little time to make since you need to form all the little balls. But it’s not difficult and you can soon get yourself in a rhythm.

Some tips to help them turn out well:

See how they come together in the short video!

Since the flavors in these are relatively delicate, I’d recommend you keep things simple in how you serve them. Here we had them with a simple sage browned butter which pairs really well. You could also use a simple tomato sauce, but I wouldn’t go for anything much fancier than that.

Ricotta and spinach gnudi might look a little like gnocchi, but their flavor is even more cheesy and comforting. They’re easier than you might think to make and worth every bit of effort in rolling them up. These delicate little bites are pure deliciousness.

Try these other comforting vegetarian meals:

These light but wonderfully comforting gnocchi-like balls are gently flavored and so delicious.

(By the way, in case you are curious, I found this interesting article in Saveur about the evolution of gnocchi whose early forms seem to have given these dumplings their name.)