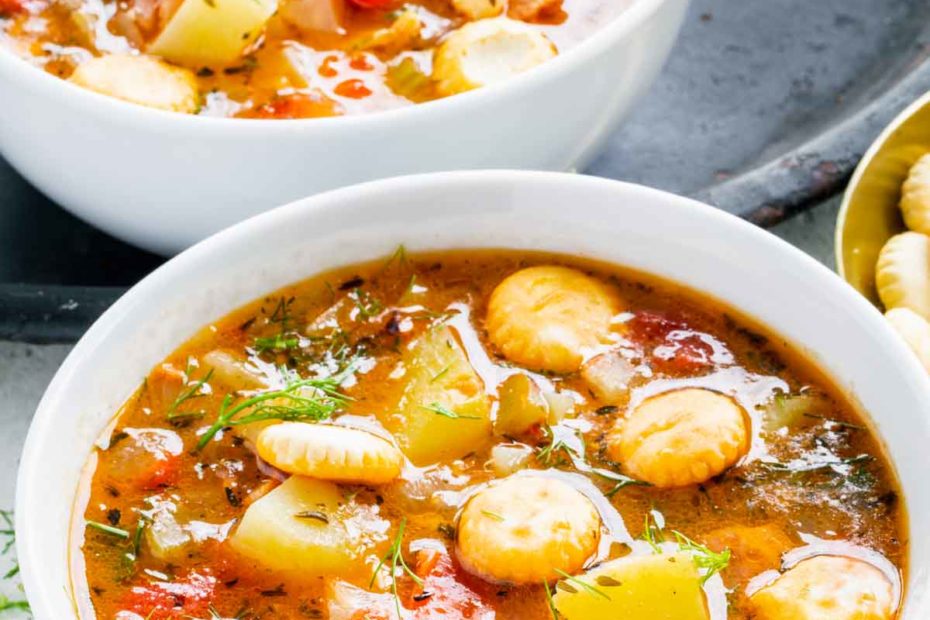 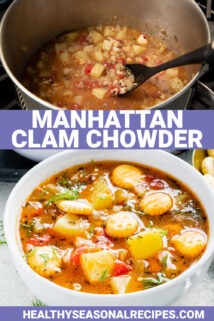 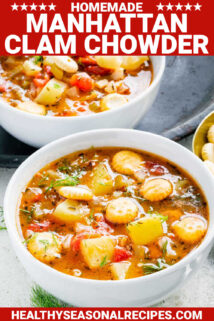 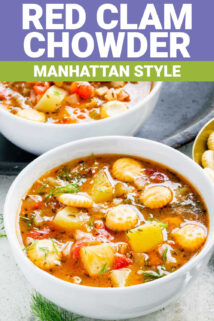 This hearty, chunky tomato-based Red Clam Chowder recipe is loaded with fresh chopped clams, tender potatoes, fennel, and smoky bacon. Also known as Manhattan Clam Chowder, this recipe is the perfect soup to warm you up on a chilly evening, to heat up for lunch, or to serve to house guests during the holiday season.

Why We Love This Recipe For Manhattan Style Red Clam Chowder

While you may think of Creamy New England Seafood Chowder or Rich Corn Chowder when you hear the word “chowder,” but did you know there’s also another chowder without cream known as Red Clam Chowder or Manhattan Clam Chowder? It is a hearty tomato-based, and yes red chowder. Our homemade recipe has plenty of chopped clams, chunks of tender veggies and potatoes, and a flavorful savory broth instead of milk or cream.

These chopped shucked clams are sold by the pound in brine in deli containers at the fish counter in large supermarkets, seafood markets, and meat markets. If they’re frozen, thaw them in the fridge overnight. If they’re still frozen after waiting overnight, set the deli container in a warm water bath for 30 minutes. Then, use the clams immediately. Reserve the brine that comes in the packaging for the recipe.

Can I make this chowder with Canned Clams?

You can! Just substitute in 1-1/2 cups minced canned clams, drained (or about four 6-1/2 ounce cans). If you use canned clams, do not simmer for 1 minute in step 6.

For the clam juice, I used Bar Harbor brand clam juice. It’s lower in sodium than other brands, so it will make your chowder much less salty. If you can’t find Bar Harbor, no worries. Just skip the added salt, taste, and adjust your salt content at the end.

For vegetable content in this recipe, we use sweet onion, fennel, celery, and white potatoes.

Use a 14-ounce can of diced tomatoes. We love the smoky flavor fire roasted diced tomatoes add to the chowder. If you like a little bit of spice, look for those with added green chiles.

The seasonings in this chowder include minced garlic, thyme (dry or fresh), smoked paprika, celery seed, freshly ground pepper, and salt to taste.

How To Make Homemade Chowder with Fresh Clams

Place the chopped bacon in the bottom of a large heavy-bottom soup pot on medium heat. Cook the bacon, stirring often until it’s crispy. This should take about 5-7 minutes. Remove the bacon pieces with a slotted spoon and place them on a plate lined with a paper towel.

Add oil to the bacon fat in your pot and then add onion, garlic, and salt. Stir occasionally as it cooks until the onions are golden brown, about 6-8 minutes.

Increase the heat to medium-high and then stir in the fennel, celery, thyme, smoked paprika, celery seed, and pepper. Cook the mixture, stirring often until the vegetables start to soften. This should take about 2 to 3 minutes.

If you’re using dry white wine, add it now and bring it to a simmer. Cook until the wine is mostly evaporated, which should take about 2 minutes.

Add in the broth, clam juice, and potatoes. Bring the pot’s content to a simmer and then reduce the heat to medium-low, or to maintain a simmer. Cook until the potatoes are tender, about 12-14 minutes.

Add the tomatoes and clams, and then return to a steady simmer. Stir often and simmer for one minute. Do not overcook. Stir in the bacon and remove your soup pot from the heat. Ladle the chowder into bowls and top each serving with chopped fennel fronds. Serve hot and enjoy!

What is the difference between Rhode Island, Manhattan, and New England Clam Chowder?

Why do they call it Manhattan Clam Chowder?

Can red clam chowder be made ahead?

You can make the chowder base up to one day in advance (up to step 6) and then bring to a simmer and stir in the tomatoes and clams before serving. You can then store the chowder leftovers in an air-tight container for 3-5 days in the refrigerator. Reheat until steaming hot but do not boil when reheating.

Advertisements
Can I freeze this chowder?

Yes, you can freeze Manhattan Clam Chowder for 4-6 months. Defrost the soup by placing it in the fridge overnight and then heating it through on the stovetop.

What do I serve with red clam chowder?

I recommend oyster crackers and bread! They were made for clam chowder! You can also serve it with cornbread or corn muffins, or salad, or you can serve smaller portions of the chowder with a sandwich or wrap for lunch.

Thanks so much for reading! If you are new here, you may want to sign up for my email newsletter to get a free weekly menu plan and the latest recipes right to your inbox. If you make this recipe, please come back and leave a star rating and review. I would love to hear what you thought!

This Classic Manhattan-Style Red Clam Chowder has chunks of tender potatoes, celery and fennel and is loaded with freshly shucked clams.

Canned Diced Tomatoes: We love the smoky flavor fire roasted diced tomatoes add to the chowder. If you like a little bit of spice, look for those with added green chiles.

Shucked Clams: These chopped shucked clams are sold by the pound in brine in deli containers at the fish counter in large supermarkets, seafood markets, and meat markets. Sometimes they’re frozen. Thaw in the fridge overnight. If still frozen, set the deli container in a warm water bath for 30 minutes and use immediately. Include the packing brine in the recipe.

Katie Webster studied art and photography at Skidmore College and is a graduate of the New England Culinary Institute. She has been a professional recipe developer since 2001 when she first started working in the test kitchen at EatingWell magazine. Her recipes have been featured in numerous magazines including Shape, Fitness, Parents and several Edible Communities publications among others. Her cookbook, Maple {Quirk Books} was published in 2015. She launched Healthy Seasonal Recipes in 2009. She lives in Vermont with her husband, two teenage daughters and two yellow labs. In her free time, you can find her at the gym, cooking, stacking firewood, making maple syrup, and tending to her overgrown perennial garden.