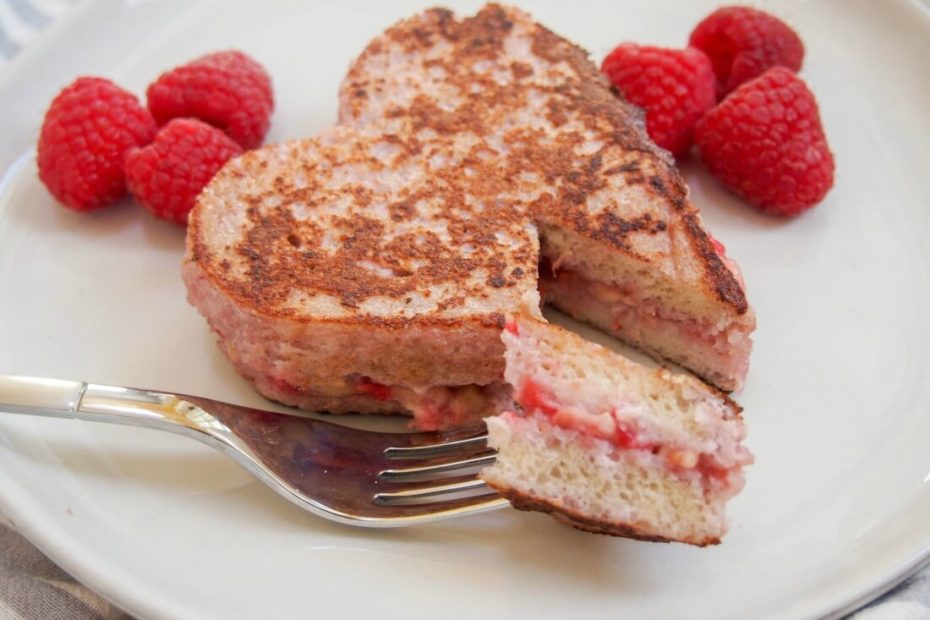 Why not treat someone to a fun and delicious raspberry stuffed French toast for breakfast? Easy to make, the banana raspberry filling takes French toast up a level, while still being relatively healthy.

I’ll admit, I’m not a particular Valentine’s day person. But it can be an excuse to make some fun food, and that’s exactly what this raspberry stuffed French toast is. As well as being a tasty breakfast, of course.

This stuffed French toast is easy to make and the gooey stuffing really makes it that bit special. There is a double dose of raspberry in here, so the flavor really comes through and is delicious.

The raspberry in this is both mixed in with the egg and part of the stuffing. Stuffing French toast is something I first had a few years ago thanks to a Jamie Oliver program.

It’s a great idea, and one to try other times as well. The filling warms slightly as you cook and gently oozes out as you eat it.

Here I’ve stuck with raspberry and banana but you can use other fruit as well such as blackberry or blueberry. I recommend you don’t skip the banana, though. It makes for a creamier filling, though, that holds together and doesn’t burn your mouth as I suspect just berries would. I’ve seen some versions using fruit with cream cheese, but personally this is more my kind of flavor.

I have, given the Valentine’s theme, cut the bread in to heart shapes but of course there’s no need to do that if you don’t want to. However it does look cute, don’t you think?

Making French toast is really easy and pretty quick as well, and always goes down with young or old. The twists on this one make it extra tasty and are only a teeny bit more work. Unfortunately the raspberry in with the egg starts off a nice pink then goes purple, but the color largely disappears when it is cooked, so it doesn’t really make that much difference.

I tried it with just egg white, as in most of these photos and it keeps the color a little better, but I personally prefer the flavor with the whole egg so I’d rather sacrifice the color a little. The picture above is the version with full egg, for comparison.

For now, I hope you’ve built up your appetite to give this a go as it makes for a great breakfast or brunch, whether for Valentine’s day or any excuse.

A decadent-feeling French toast that’s so easy to make.