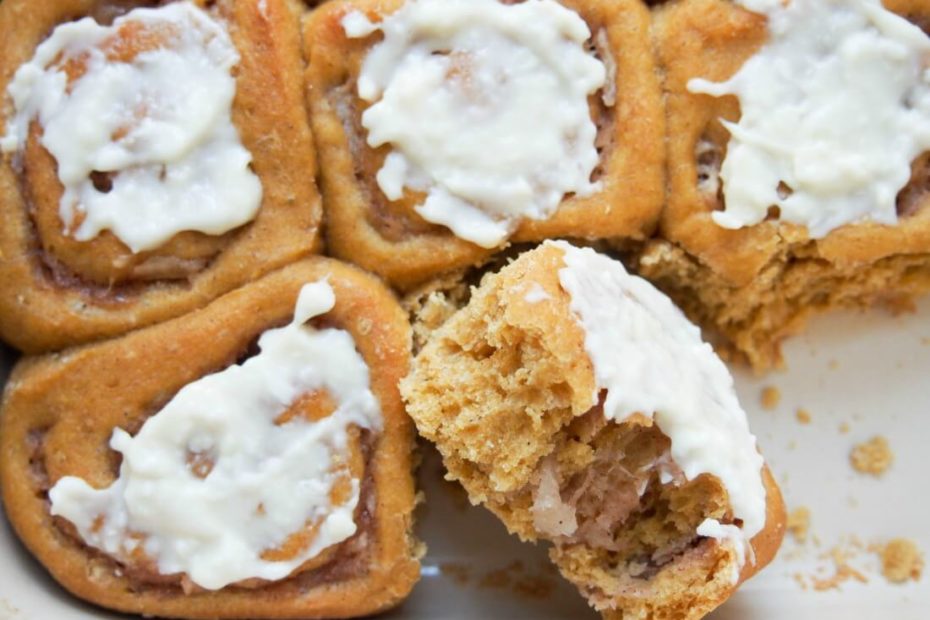 These pumpkin cinnamon rolls with maple-apple filling are healthier than your average roll, made with whole wheat flour and no refined sugar, but they’re soft and full of tasty fall flavor.

If you’re from North America, you might not be aware that cinnamon rolls are a distinctly American thing. That’s not to say there aren’t similar things in Europe – the UK has Chelsea buns which I loved now and then when I was younger, and Scandinavia has cinnamon buns.

I’ve been meaning to make some myself for longer than I can think, and finally got round to it with these pumpkin cinnamon rolls with maple-apple filling. These were definitely worth the wait – so wonderfully moist, flavorful, but healthier than your average cinnamon roll with whole wheat flour and no refined sugar.

If cinnamon rolls are typically American, then given the obsession with all things pumpkin this time of year here, pumpkin cinnamon rolls must be another step up from that.

While I’m not necessarily in to pumpkin spice everything, I do like using actual pumpkin in recipes (or other winter squash) as you may have seen with the pumpkin gnocchi and pumpkin empanadas I shared last week for pumpkin week.

I won’t lie, pumpkin cinnamon rolls do take a little bit of time if you make them in the traditional way. Between allowing the yeast to bubble up, kneading the dough, the two rises and rolling and cutting them up it all takes a bit of time.

However none of it is that difficult and there’s a fair bit that’s hands-off. Plus, the nice bit is you have the option to do the work the day before and then all you do is take them out, let them do a final rise and then bake them the next day. In other words, these work really well if you are hosting brunch. And even if you’re not, the delicious result of these pumpkin cinnamon rolls is definitely worth it, in my mind.

These pumpkin cinnamon rolls make a delicious snack, brunch or any excuse you want to make to have them. Gently spiced, with a tasty apple-y filling, there is a definite taste of fall. And best of all, they’re pretty healthy so you have every excuse to have another one.

Try these other sweet rolls:

These pumpkin cinnamon rolls pack all your favorite fall flavors into tasty little bites (that are pretty healthy too).