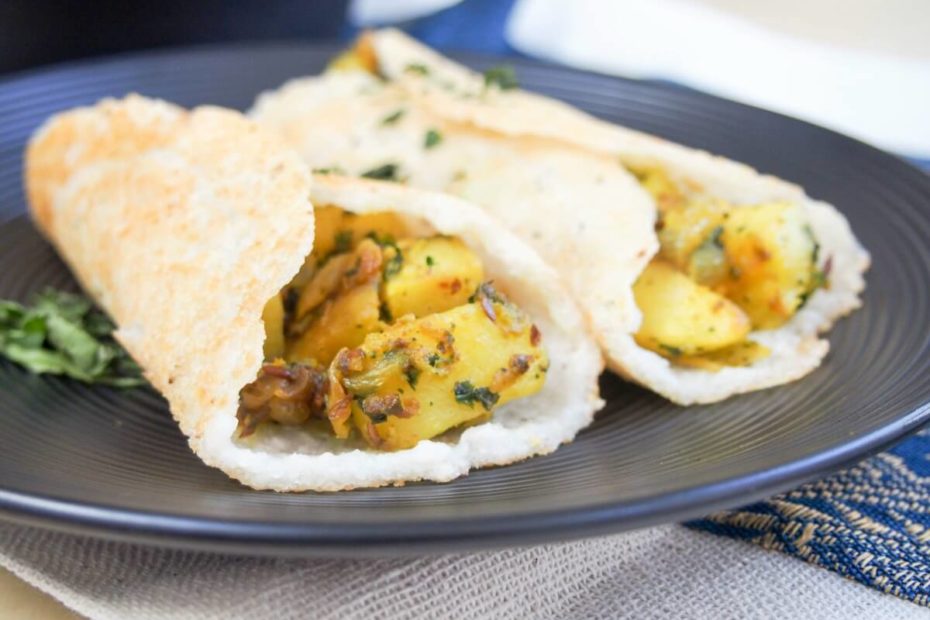 Masala dosa is a traditional South Indian savory pancake with a spiced potato filling. Light and crisp, they’re a delicious snack or lunch (or as traditionally eaten, for breakfast/brunch).

I mentioned when I shared the brinjal pickle recipe not long ago that I was lucky to grow up trying some pretty good Indian food, but dosas (a kind of Indian pancake) were not part of that. I think there are a couple reasons.

Firstly, dosas are generally considered more of a breakfast/lunch dish and more traditionally served by street vendors or more cafe/fast food outlets than a restaurant. We didn’t really have those. Secondly, they are from South India and I think very few from that region made it to Scotland – in general people from warmer climates don’t tend to make it home for understandable reasons.

In any event, it wasn’t until after we moved here that I tried a masala dosa and I really enjoyed it so knew I needed to make one myself at some point. A pancake-themed Foodie Extravaganza, that I’m hosting, seemed like the perfect excuse to make this potato-filled deliciousness.

I actually bought the ingredients I was missing to make masala dosa many months ago now but somehow it didn’t quite happen. I think the fact it’s a bit of a longer process than your average pancake put me off a little, but having now made them once I will certainly make them again as they were so tasty.

Yes, these are a little more involved than some dishes, and yes, your first pancake might not come out perfectly but already by my second or third I felt I was getting good enough at least to serve others even if not perfect.

The result is worth the effort. They’re a fairly light savory pancake that’s slightly crisp on the outside, a flavorful potato filling that while a bit carb-heavy is otherwise pretty healthy and both vegetarian and gluten free.

Think of them as kind of the South Indian equivalent of the Ethiopian injera and tikkel gomen I shared where the result is so much better than the ingredients list may suggest. I’ve drawn on this recipe, as well as others, with a few adaptations in making them and really enjoyed the result

You can do a number of steps in making these ahead of time – in fact you have to do some of it ahead of time. The dosa ingredients need to soak then ferment, though each of these steps is relatively quick. When you come to cook them, that, too, doesn’t take long.

We had a couple of these (I made them relatively small as it’s easier to cook that way) for lunch, along with some leftover brinjal pickle and it was delicious. Before anyone tells me otherwise, yes I know that’s a thoroughly non-traditional accompaniment as it’s from a different region. Instead I should have had sambar alongside, but that’s what I had and it was still delicious.

Given there are regional variations on the masala dosa theme anyway, I am letting myself off, and I am in no ways proclaiming to be an expert.

A couple of things I found in making these that may be helpful to bear in mind:

Masala dosa might not be the first thing you think of when you think of pancakes, but they are a fantastic savory option that are full of flavor. They make a great lunch and have the added bonus of being gluten free.

Don’t be put off by the fact they take a little more time, they are definitely worth trying. I’m definitely looking forward to making them again (although this time with the right dal). Their crisp shell and slightly spicy filling make them almost addictively good.

Try these other international brunch ideas:

These might take a little advanced preparation, but the result is a deliciously crisp pancake and gently spiced filling.

As you are ready to cook

Note- you’ll need to start preparation the day before.

See more pancake ideas for this month’s Foodie Extravaganza below: