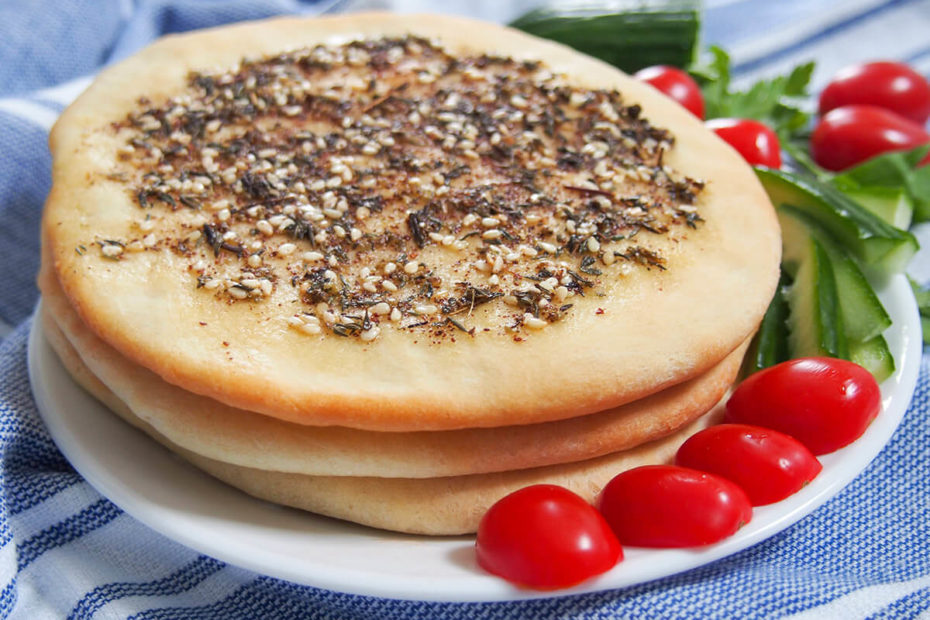 Manakish za’atar are delicious flatbread from the Levantine region topped with olive oil and za’atar. The oil and herbs add lots of aromatic flavor, making this bread perfect to snack on either as-is or with simple toppings.

I’ve long enjoyed za’atar, both the herb and the more common blend which includes sumac and sesame. Both are wonderfully aromatic, and the blend, for example, is a great simple way to add flavor to dishes like my za’atar chicken.

One of the most popular traditional uses for za’atar spice blend is on top of a simple flatbread. It’s a simple combination, but with delicious results.

The origins of manakish (also called manakeesh, manaeesh or manaquish, singular man’ousheh or manoushe, depending where you are) are a little vague. Some say it’s a modern invention, but more likely, they have been around for many centuries. The ingredients are certainly not new in the region.

They are most popular these days in Lebanon, and firmly considered a core part of Lebanese cooking. It’s a popular choice for breakfast, for example. You will also find the bread in other countries in the Levant region, such as Syria and Palestine, where some say it originates.

Za’atar is the most popular topping for this bread, but it’s not the only one. Some use the oil and za’atar as a base or simply add other toppings instead. Common additions/ alternatives are cheese, minced lamb, spinach or chili. The lamb version is very similar to lahmacun (and in fact that name is often used).

Here I’ve kept with the classic za’atar – a favorite for good reason.

Stages to make this flatbread

This is a yeasted bread, and follows the relatively typical process of mixing and kneading the dough, giving it a first rise, dividing into smaller pieces then allowing to rise again. Then to make as flatbread, you roll out, top with the oil-za-atar mix and leave a little more before baking.

See how it all comes together in the short video!

You have a little bit of flexibility on whether you let it rise more in the smaller balls or more after you roll it out flat. With the former, you typically get a more even shape and a bit more chew, while with the latter the breads are typically a little more irregular but with more air in the end texture.

It’s going to taste good either way, but all the more excuse to experiment and see what you prefer.

When and how to serve these flatbreads

These are common as a breakfast or lunch item in Lebanon and often eaten just as they are. You may also, particularly with the za’atar version, add some simple toppings like cucumber, tomato and parsley. It makes a really tasty sandwich-like snack or light meal.

As well as the different toppings, you’ll find these breads made in different sizes as well. Sometimes they are pretty small, just a bit bigger than a large pitta bread as I have made here, while other times it will be nearer a small pizza size. This is really more personal choice, so feel free to divide the dough differently as suits.

Manakish might start with a simple bread base but the tasty oil on and za’atar topping adds so much tasty flavor. They’re perfect for a snack or with simple salad-y additions for a light lunch. They are popular with everyone on our household, so give them a try and hopefully you’ll enjoy them just as much.

Try these other tasty breads:

These simple flatbreads are topped with a mix of za-atar and olive oil which adds a lovely aromatic flavor. Deliciously good.

Services: 6 (unless made larger)

You can use active dried or instant (rapid rise) yeast for this, as you have/prefer. If you use instant, there is no need to add to water first, you can just mix everything but it’s worth mixing all dry ingredients first to ensure they are more evenly distributed.
I use homemade za’atar spice blend for this which is really easy to make. You can also buy the blend, if you prefer, but do check ingredients to avoid versions without ‘filler’ ingredients.

I’ve drawn on a few recipes for this including this Simply Lebanese one and this from Zaatar and Zaytoun.