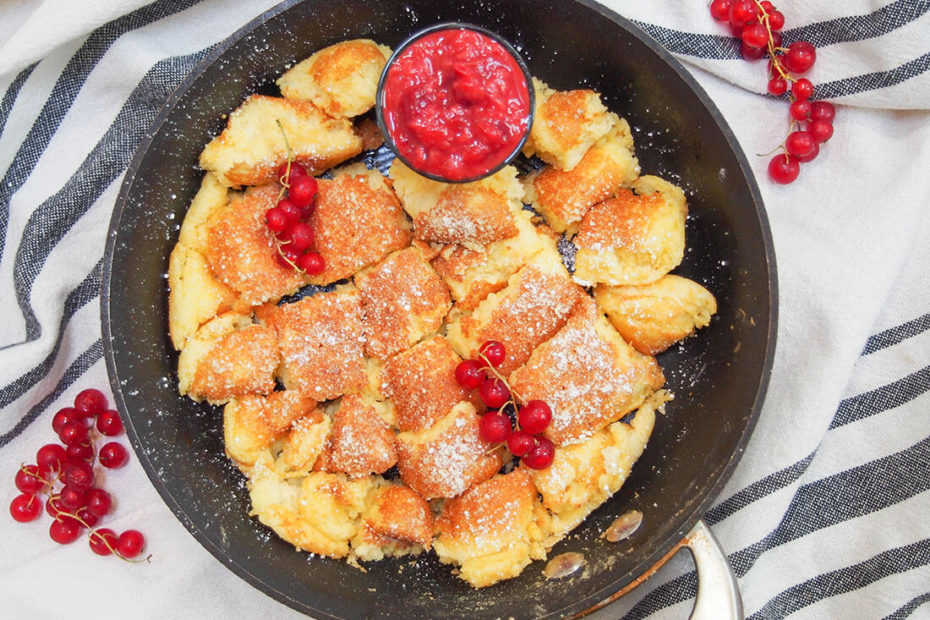 Kaiserschmarrn is a traditional torn-up pancake from Austria. Thick, fluffy, comforting chunks are dusted with sugar and served with fruit compote. Perfect for dessert, brunch or whenever.

Pancakes are a big favorite in our family. I don’t usually have time to make them during the week, when we are in school at least, but they are regularly requested at the weekend.

Often it’s “little pancakes” made with apple and carrot, similar to the beetroot and pear pancakes I have shared here. Other times it’s “big pancakes”, also known as an individual Dutch baby pancake or, more recently, a peach Dutch baby pancake.

Both are very fancy compared to the simple pancakes I grew up with, although I did love the lemon pancakes we had for Shrove Tuesday (one of the ideas in the mardi gras food I shared). But then there was Kaiserschmarrn when we went to Austria which was definitely that bit more special.

A family love of Austria

My parents kind of adopted Austria as their summer home when I was a child. For a number of years we went there every year for two or three weeks on vacation/holiday and then every other year as the addiction wore off a little.

We went to one area in particular but also visited some new ones each time. We explored different small towns but particularly took in lots of different hikes.

Compared to Scotland, Austria was a dream come true for a kid being dragged out hiking – the weather was considerably better and there were huts you stopped off in for lunch rather than huddling with a soggy sandwich behind a hill.

Sausages and goulash were the most common dishes but another that I always loved and would occasionally have as my lunch, if I didn’t share with my parents for dessert, was Kaiserschmarrn.

Kaiserschmarrn, or ’emperor’s mess/trifle’ is basically a thick but fluffy chopped-up pancake, usually served with a fruit compote and dusted with confectioner’s/icing sugar.

I always had it with a berry compote, but you can also serve stewed apples, honey, jam or whatever you really prefer.

It gets it’s airiness by separating the eggs and whisking the whites and folding them in to the main batter, much like a souffle. Some versions add rum-soaked raisins in the mixture too.

I can still see myself having it one time on a beautiful balcony restaurant somewhere, and it’s simple, tasty, comforting warmth brings a ray of sunshine to your mouth.

OK, maybe a slight exaggeration but it’s really good so I’d highly recommend trying this any excuse you get, not just Shrove Tuesday.

What to serve with these pancake pieces

Here I’ve made a simple raspberry-cranberry compote to go with it. I always remember Kaiserschmarrn served with a preiselbeern (lingonberry) sauce but they are not exactly common here so this is the closest I could do.

Redcurrants, as you can see in the photos, made into a simple sauce would be another great option though also not always that easy to find.

The sweet-tart berry flavor goes really well so this mix fits perfectly. It’s very quick to make and low in sugar so you can ladle it on. You could also use a bought compote/jam or fresh fruit, though I do recommend the raspberry-cranberry compote here.

This one to two-person serving of Kaiserschmarrn fits perfectly in a small skillet/frying pan but you can easily scale up for more people and a larger pan. However many you are serving, enjoy this easy, tasty dish. It makes a great brunch or dessert. It’s worth finding any excuse.

Tools for this recipe

I’d recommend a small skillet, such as a Lodge 8in Cast Iron Skillet for this recipe.

These traditional Austrian pancakes are light and fluffy, perfect for breakfast or dessert.

This post was first shared in Feb 2015, and has since been updated, primarily with new photos. When I first made it we had huge piles of snow so I thought I’d take a photo of it on our snow-mountain outside to remind me of the mountain settings I first had this in!