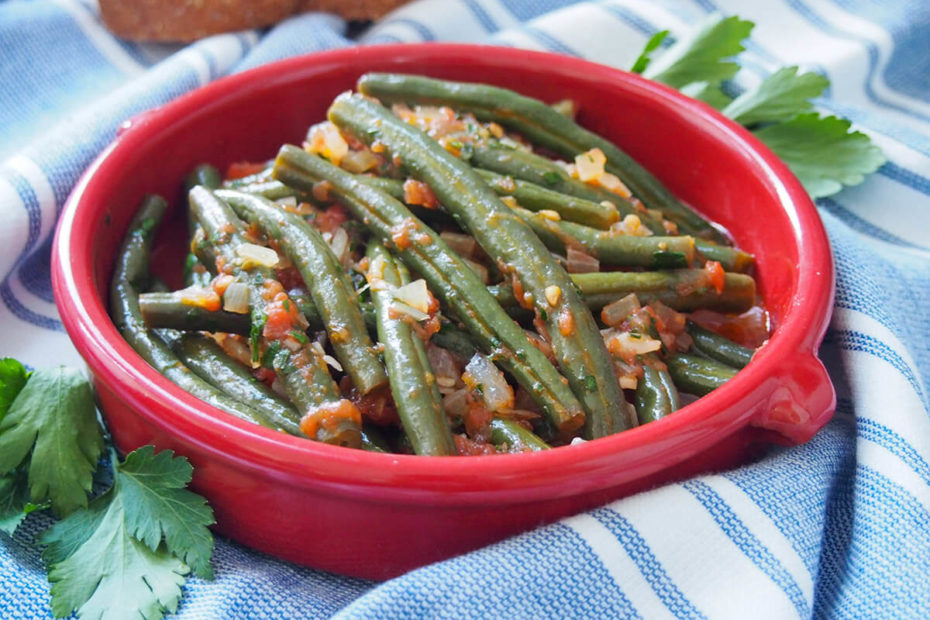 If you ever felt green beans could be a bit dull then you need to try these Greek green beans. Fasolakia is a simple way to cook them, using olive oil and tomatoes, but the result is so fresh, flavorful and delicious.

Some vegetables I find really easy to use in different ways, others less so. Green beans are definitely on the less-so end. Sure, you can throw them into a stir fry, but I find them harder to prepare just on their own.

I do quite like them steamed as a side, but some extra flavor is always a bonus. The German style with smoked ham, speckbohnen, is one I grew up with and love, but I have never quite got into the Southern-US style casserole. I was recently reminded about this traditional Greek way of preparing them which we definitely need to have more often.

Fasolakia is part of a family of Greek dishes known as “lathera” or “ladera”. It’s a style of cooking particularly used for vegetables cooking them in olive oil, often with tomatoes as well. It may not sound like anything unusual, but the dishes take a little more time to cook than a simple sauté, and this means the oil is not just to cook but to add flavor.

“Lathera” means “ones with oil” coming from the Greek word “lathi” for oil. Lathera dishes are efficiently vegetarian and it’s a style of cooking that evolved from peasant cooking.

Originally, the vegetables were cooked just with oil and water. As tomatoes were introduced to Greece in the 17th century and gradually became popular more in the 19th century, they were added to many lathera dishes as well.

For this green beans dish, using tomatoes is now the typical way to cook it. You leave everything to cook together a while and infuse with flavor.

See how it all comes together in the short video!

Olives have been grown for many centuries in Greece and the Ancient Greeks helped to spread the cultivation of olives around the Mediterranean region. They considered eating olives as important to your health and they are still a cope part of most Mediterranean diets.

Olive oil is the main fat used to cook the majority of foods in Greek cooking, both for shallow frying and roasting. It is also used as a seasoning, in marinades as well as simply to dip bread into. It’s no surprise Greece is still one of the top producers of olives in the world.

When would you eat fasolakia?

This dish is very versatile works well as part of a meze platter alongside a range of other dishes. This often includes both cold plates such as hummus and baba ghanoush as well as warm dishes like saganaki, meat dishes like Greek meatballs and vegetables like these.

Most traditionally, though, you might have this as a vegetarian main with bread on the side. One of the main times you might have it is during what’s often called the Great Lent, in the run up to Easter (Pascha). It’s an important fasting period under Orthodox beliefs.

Traditionally, meat and dairy are abstained from the whole time, while oil and wine are allowed only on Saturdays, Sundays and some feast days. Fish is only allowed on Palm Sunday. As a result, vegetable dishes which are a core part of the Greek diet in general take on a particular importance during this period.

For me, it works as a wonderfully versatile side dish to everything from roast chicken to grilled meats or other vegetable dishes. Being vegan and gluten free as well, it’s great for a broad range of diets.

Whatever the reason or timing, Greek green beans, fasolakia, is easy to make and packed with flavor. You don’t need that many ingredients, but they all come together so beautifully to let all the elements shine. They’re a great way to use some green beans, so be sure to enjoy soon.

Try these other tasty vegetable side dishes:

These Greek green beans take a little time, but without much effort. The result is wonderfully flavored beans, perfect as a side or main.

I first shared the recipe for fasolakia, Greek green beans, on Curious Cuisiniere where I am a contributor.