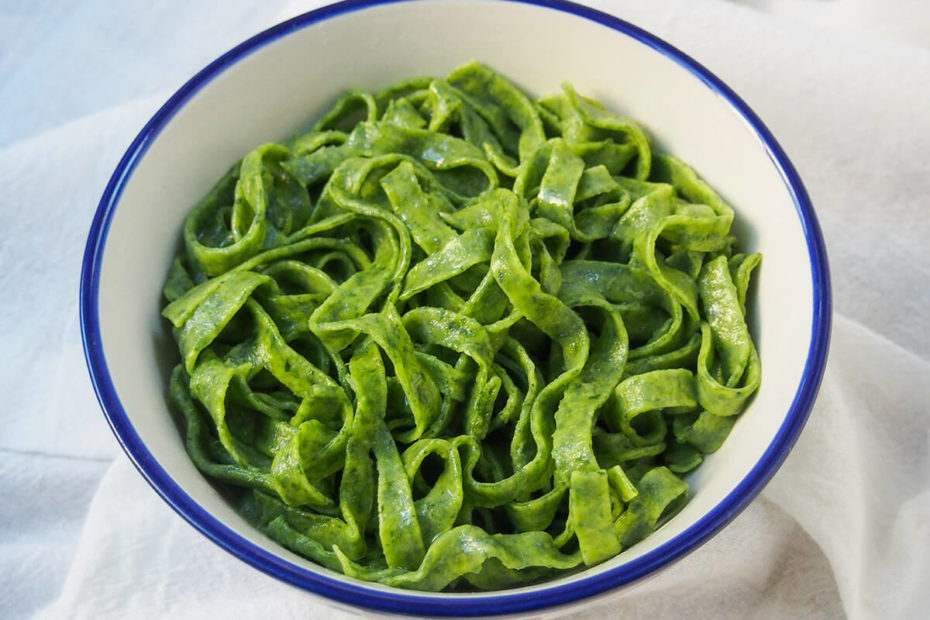 Making your own fresh spinach pasta dough is easier than you might think and the result is so delicious. You can pair it with a variety of sauces for a simple, tasty meal.

A few years ago now, I decided to gift myself a pasta maker

. It was something I had thought would be nice to have for years, but I’d always held off actually getting one. Which was silly, in some ways, as I do love making things from scratch and we are big pasta fans.

For some reason I jumped straight in with making ravioli. Not necessarily the easiest to start, but it was a relative success and we loved the results. Over the years, while we don’t use it all that often, it’s often enough to at least say I’ve become more efficient and confident.

This spinach pasta was one that I made early on and it’s one we come back to relatively often. Yes, it looks just like the green pasta you can buy in the store but believe me, just as plain homemade pasta is that much better than bought, so is this.

I won’t lie, making pasta isn’t the quickest thing in the world. However, it really isn’t that hard and you soon get in the swing of things. Kind of like making bread, you could even call it therapeutic and the end result is certainly worth the effort.

Do you need a pasta maker to make this?

No, you don’t, need a pasta maker (either standalone as I have here or an attachment to a stand mixer). But they do make things that bit easier and quicker.

I made homemade pasta by hand when we were in Australia without my pasta maker, and you can still get it relatively thin and even rolling by hand with a rolling pin. However it does take longer and your hands do get a bit sore by the end!

You may also find, since it’s a little slower, that your pasta dries out a little more. If you plan to save some, this may not bother you, but if you are cooking straight away you may want to cover your cut pasta with a cloth.

In general, this is much like making any other pasta, but a couple tips to keep in mind:

Can you make fresh pasta ahead of time?

There are a few choices if you want to make this pasta ahead of time. First, if you only want to make it an hour or so ahead, you can make the pasta, put it in bundles on a baking sheet and cover it with a cloth to keep it from drying too much.

If you do this, just make sure you keep your pasta pretty well floured as you cut it to save it sticking. Also, store it at room temperature – in the fridge it will get damp and stick together.

You can also dry pasta for another day (though I recommend using some the day you make it and then save leftovers. It is that bit better when fresh). If you dry it, you’ll need to hang the strips, separated so they don’t stick together, until they are fully dry. To be safe, you are best to leave overnight.

Once dry, you can store the dry pasta in a bag at room temperature. Then, when you cook the dried pasta just be aware it will take quite a bit longer to cook compared to being fresh. Make sure you test that it is done – it will take more like 8-10 minutes rather than 2-3 minutes when fresh.

How to serve spinach pasta

This is a pretty versatile pasta that can be served in a range of ways. You can serve it with a marinara sauce or pesto, or go really simple with browned butter or olive oil.

This style would also work well with a creamy sauce like alfredo or gorgonzola. It would be great as a base for a seafood pasta dish, particularly one with a creamy white sauce.

One of our personal favorites is with walnut sauce (as in picture above) which is a bit like a pesto but with different ingredients and easy to make, too.

You could also leave the pasta as whole sheets rather than cutting it into linguine/fettuccine and use it to make lasagna. And of course you could use it in other forms too, such as for ravioli (a simple cheese filling would be good).

This fresh spinach pasta is such a beautiful color and tastes great, plus it’s packed full of spinach goodness. Yes, it takes a little time, but you can almost taste the effort as you enjoy it. And enjoy you will.

Try these other homemade pasta recipes:

which works very well. I also suggest a pasta drying rack if you are planning to dry any leftover.

Fresh pasta is something special and this spinach version has an added nutritional punch. Comforting and tasty.

While it can be easiest to use a food processor since you can then pulse as you add the flours, you may want to use a blender initially if your food processor is not that good at breaking up the spinach. It’s OK to have little chunks of spinach, but the pasta will be smoother if you can get it really fine (and it’ll be a more even green and easier to cut into linguine etc). If you use a blender, you can then either transfer back to food processor or, to have less to clean up, mix by hand. Place the flour on your work surface in a pile, make a well in the middle and then pour the egg-spinach mixture into it. Use a fork or your hands to gradually incorporate the flour into the egg mixture.

This post was first shared in June 2015 and has been updated, primarily with new photos.