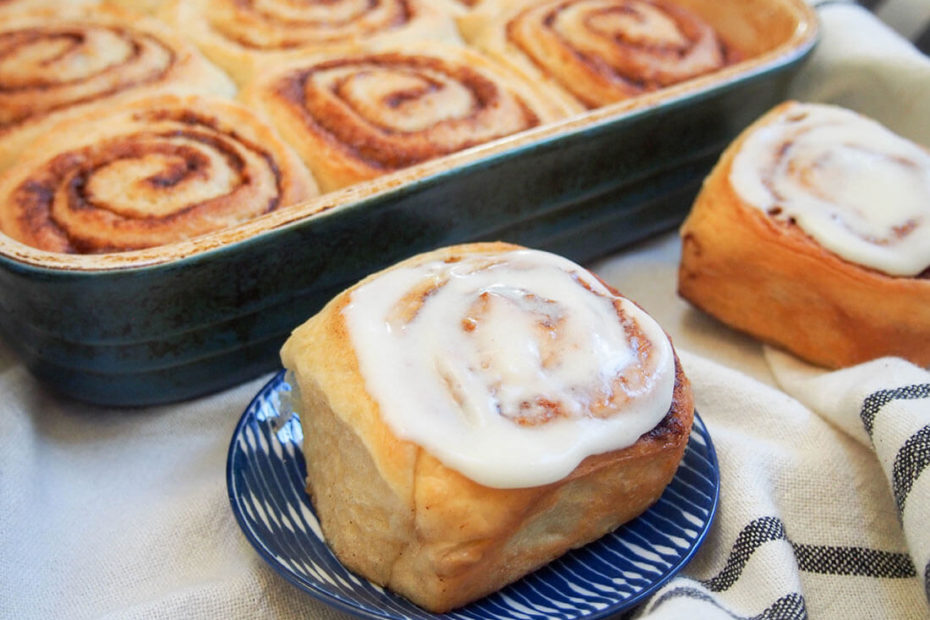 Warmly spiced, pillowy soft bites of taste, these eggnog cinnamon rolls are just begging to be eaten. They’re the perfect addition to any brunch or celebration.

I don’t know about you, but I can hardly believe that it’s That Time already. You know what I mean – the month when you are running around like crazy, hosting, going to events, trying to fit in gift shopping (unless you are more organized, of course).

It can all be a bit of a whirlwind. But especially with kids, it’s a magical time as well. I’m looking forward to taking my older son to his first Nutcracker performance this year and both boys are fully aware of the excitement of the season.

Hand in hand with all those festivities is eggnog. It’s family-friendly and so much a part of the season. And to save you some work, Hood has created the perfect tasty blend of extra creamy milk, sugared yolks and spices to add to your seasonal celebrations.

Since there’s so much going on, I find the odd shortcut and make ahead recipes are just what this season needs. And these eggnog cinnamon rolls have the best of both, as well as fantastic flavors.

You can make these cinnamon rolls the day before, leave them in the fridge overnight then bake them up for a Holiday brunch or whatever excuse you want to find the next day.

How to make eggnog cinnamon rolls

I considered going down the one-hour cinnamon roll route I’ve seen, but I do think these benefit from the traditional two rises. And as I say, this lines up perfectly with leaving them overnight. That to me is way better than more work in the morning.

Now I know, this seems like a few steps but really they’re not that tricky at all. And the end result is so worth the effort.

I’ve taken a couple of tips from A Spicy Perspective’s cinnamon rolls where she blends the butter, sugar and cinnamon together to make a paste, rather than spreading butter and then drizzling cinnamon sugar. Definitely easier. She also added a little nutmeg to bring out the cinnamon flavor, which I had been planning anyway to match the eggnog in the rolls.

Since the eggnog is sweetened, there’s no need to add more sugar to the dough and it adds a little spice (which you can change up, too).

A cinnamon roll perfect for the Holiday season

I’ve made a couple of cinnamon rolls before which I loved (chocolate orange cinnamon rolls and pumpkin cinnamon rolls with apple filling, in case you missed them), but these are definitely the most fitting for this time of year.

In fact, these are probably our favorite cinnamon rolls to date, they’re so soft, rich and delicious.

They have wonderful flavors not just in the cinnamon filling but right through the rolls thanks to the Hood Eggnog, and I’m sure the eggnog has a lot to do with their rich smoothness as well.

One of the great things is it’s really easy to change them up slightly by using one of the other four seasonal flavors that they’ve made.

Hood’s pumpkin eggnog is available before Thanksgiving, with real pumpkin and pumpkin spice, then through the rest of the season you can choose from golden eggnog, your classic rich and creamy blend, vanilla eggnog with a lovely additional vanilla flavor, and then they’re bring back light eggnog with 55% less fat.

All would be great both in this recipe, as well as many other eggnog recipes (I’m thinking maybe French toast or pancakes? You can get some more idea’s on the Hood website). If you’re wondering where to buy them, just head to your local supermarket and look in the dairy aisle.

This time of year can fly by, as I say, but there are also so many opportunities to make memories with friends and family and enjoy some delicious food. These eggnog cinnamon rolls are soft, sweet, rich and delicious – so perfect to add to any occasion. So grab a carton of eggnog while you can and whip up a batch to share. With a glass of eggnog on the side, of course.

Try some other tasty sweet rolls and cakes:

These eggnog cinnamon rolls are wonderfully soft, smooth, rich and flavorful. Add them to your seasonal baking!

For the cinnamon rolls

For the frosting (optional)