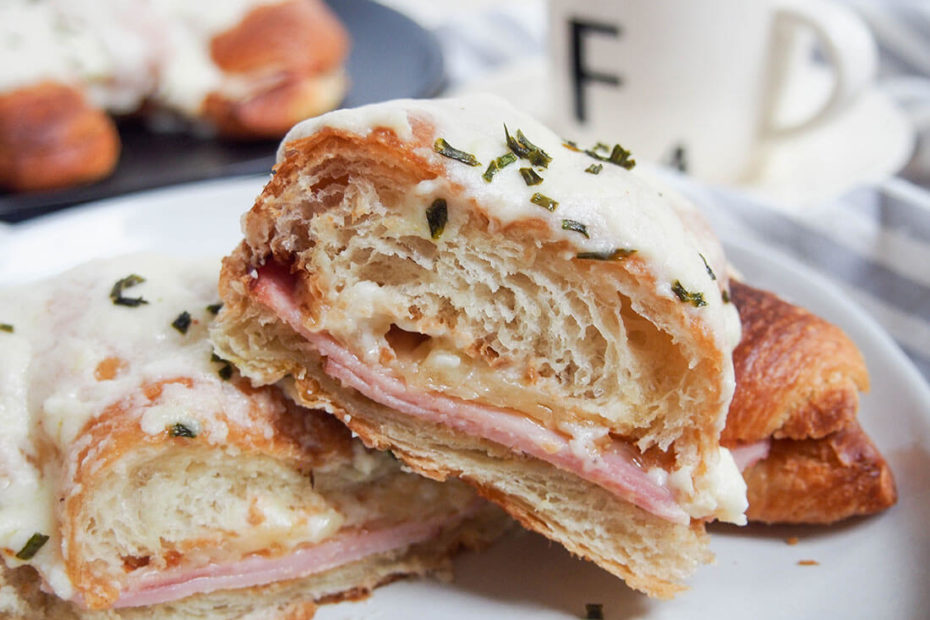 This croque monsieur croissant is the ultimate grilled ham and cheese sandwich. Instead of the usual plain white bread, here it’s made in a croissant for a deliciously decadent brunch or lunch.

I know for many, January is all about cleansing and dieting, but that has never been my style. I guess I am lucky to have a pretty good metabolism which helps, but I have always been more of the belief to largely eat healthily and eat everything in moderation. You hopefully get that sense from the range of recipes I have shared.

To me, in most cases if your diet is fairly balanced, the chances are you’ll be fine and it saves you having to worry about the number of calories in this or that and just enjoy life and your food.

Of course I am saying that as a preface to something that is one of those slight indulgences – this croque monsieur croissant isn’t going to win any prizes as a healthy breakfast/brunch or lunch, but boy is it good now and then.

What is a croque monsieur?

If you’ve not come across croque monsieur before then basically it’s a contender for the best grilled ham and cheese sandwich there is. If you’re wondering why I have gone so far as to claim that, well take a look. And then let me tell you it’s down to great ham, some flavorful cheese and bechamel sauce plus a little mustard coming together to create oozing deliciousness.

I first came across them when I was relatively young on vacation/holiday in France, and then somehow forgot them until quite recently. How, I’ll never know, but now I have re-discovered them they are one I’ll indulge in now and then.

Traditionally croque monsieur is made on fairly plain sandwich bread but here I’ve put it on a croissant as they do at a cafe not too far from us and it’s one I had to try myself at home as it was a great combination; a marriage of two fantastic French delights.

I did debate about trying to make my own croissants, but I’m afraid time, and a cold, haven’t really allowed for that recently so I have gone with ready-made. But for this, that’s not such a big deal as everything else is what makes this truly special.

One thing to note about toasting croissants, in case you haven’t done so before, is they first go soft and then crisp up, I think due to the amount of butter in there.

If you don’t toast them before you put the topping on, they’ll just soften rather than be crisp – it’s still tasty but just be aware if you think it will stay as crisp as it is cold, it probably won’t.

You can crisp them by pre-broiling/grilling but beware that the line between toasted and burnt is very fine with croissants so keep a close eye on them.

Do you really need the bechamel sauce?

You may have read the bit about these including bechamel and thought why on earth you would go to the effort of making bechamel sauce for a ham and cheese sandwich; how very French. Well, the truth is it just makes it so much better it really is worth it, and it’s not that hard to make either.

Not only to you get lots of cheese flavor, it soft and creamy as well – there’s no rubbery and chewy cheese going on here. It’s somehow so much more comforting and indulgent-feeling, you can’t help thinking it is such a good idea as soon as you take a bite.

Whether croque monsieur croissants are the best ham and cheese sandwiches or not I don’t know, but I do know you should give it a try as they are so amazingly delicious.

Looking for more tasty ideas for a decadent brunch? Try these!

A decadent, delicious and comforting take on a ham and cheese sandwich.

Looking for other ideas with croissants and crescent rolls? Try these other ideas: