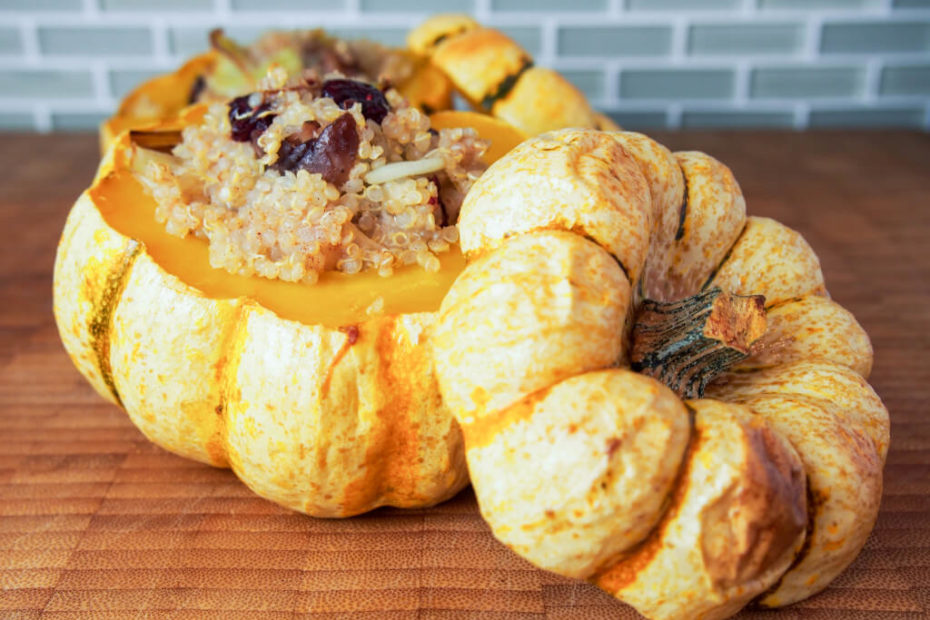 This cranberry, chestnut and quinoa stuffed squash makes for an impressive and delicious fall main dish. Tasty and good for you too.

I don’t know if I am just noticing more than before, but there seems to be a broader variety of squash available this year than I remember in the past, at least more consistently. I always have good intentions of trying more varieties – I have at least branched out into delicata and acorn squash – but somehow it ends up being a slow process to try more.

Take these cranberry, chestnut and quinoa stuffed squash, for example – I got the sweet dumpling squash with the intention of stuffing them a couple weeks ago and have mulled over quite what to stuff them with. Then I have procrastinated about actually making it ever since. I’m not quite sure why, especially since I really liked the sound of what I was planning.

However one thing is for sure, it won’t be as long next time as these were delicious and easy so definitely need to be repeated.

The components of these quinoa stuffed squash

Sweet dumpling squash kind of beg to be stuffed as they are an ideal shape. They also make a perfect individual portion size once they have lots of nice goodies inside them. I wanted to stick to some seasonal ingredients but also make sure they had a balance of sweet and savory, as well as having enough ‘bulk’ to them without being too heavy so they would work as a main dish.

I considered going down the cheesy route but instead opted for making a loaded quinoa stuffed squash, with a quinoa mixture that can be made up as the squash are cooking. It makes for a delicious dish that’s filling without being stodgy and has a fantastic range of flavors. I have included chestnuts which, while I love roast chestnuts don’t worry, you fresh. Just use pre-cooked and break them up, so they are really easy to use, but if you can’t find them, pecans would be an OK alternative.

How to prepare the squash

While I have used sweet dumpling squash, you can also use acorn squash if you prefer. I found the best way to bake the squash was to cut off the top quarter roughly, scoop out the seeds etc from the middle, put in a little coconut oil and maple syrup then put the ‘lid’ back on and bake. If you have larger squash you can also cut them down the middle and then bake them cut side down and serve a half as a portion instead (this does mean you don’t have the maple syrup in them as they bake but you can always add a little more to the quinoa to get the flavor).

Leaving the halves cut side up would work too, but you might want to check on them and cover part way through so the edges don’t dry out. Either way, you basically just pop them in a warm but not too hot oven and leave them to get on with it.

The squash are cooked when they give when you squeeze the outside (although do be careful, they are hot!) and will be tender if pricked with a knife. The exact time varies a lot with size, and I think freshness and thickness can impact as well, so do check after around 30min every 10-15min.

How to put together the quinoa stuffed squash

Making the quinoa stuffing is pretty easy as well. You simply cook the quinoa according to the instructions, generally a 10min simmer, and meanwhile soften the leeks in some oil. Then you add the apple, soften a little, followed by everything else and that’s it.

Once the squash are done, you add the stuffing and cook another few minutes in the oven. You’re just looking to warm it back through and let the quinoa soak up the maple mixture in the squash. You can serve any leftover quinoa on the side. It’s also tasty enough you might like to make extra and have it for lunch the next day, possibly with any leftover squash chopped up and added in.

Dumpling squash’s flavor is that familiar soft, tender, autumnal taste of other squash, but it’s not overly sweet. The quinoa stuffing then adds a broader range of flavors and a little sweetness from the apple and cranberries dotted inside. I think it’s nice to get a forkful of both the squash and quinoa together to enjoy all the flavors.

Thought of course, eat it as you prefer. You can eat the skin of these squash too. It’s a bit like potato skin after baking – a little thick but still edible and tastes not bad. Alternatively, take it off as you go.

All in all this quinoa stuffed squash is a delicious, comforting dish that’s filling but not heavy. It makes for a great meal at this time of year as it has such a tasty range of flavors. You could also serve it as a vegetarian (and vegan) main dish alternative for Thanksgiving and other holiday celebrations coming up. It is, after all, a pretty impressive self-contained serving of goodness. Whenever you might have it, it’s a great dish that we really enjoyed and I hope you will too.

Try these other tasty (and vegan!) squash dishes:

A delicious mix of fall flavors, these stuffed squash are a self-contained meal.