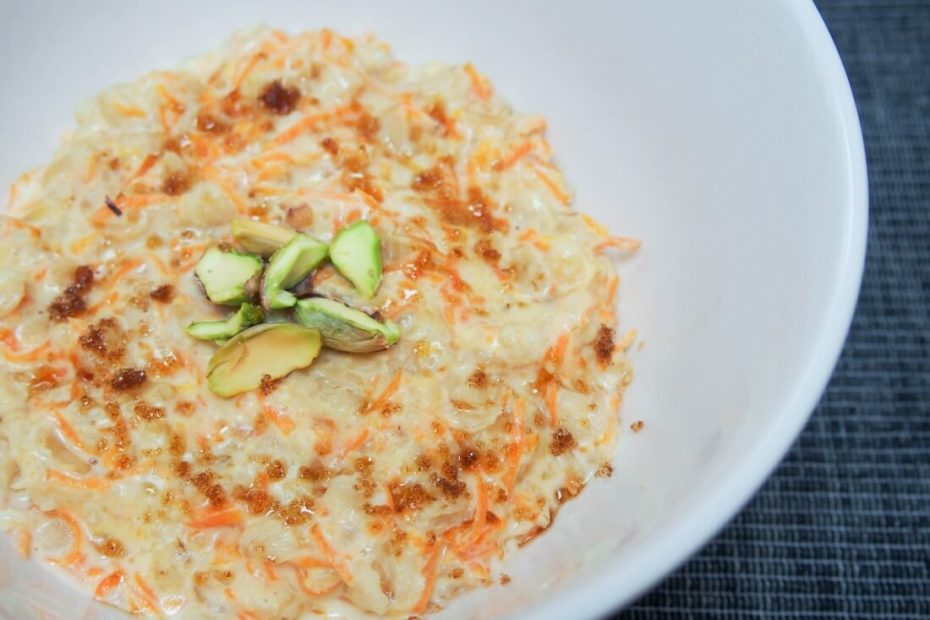 This carrot halwa oatmeal combines a traditional Indian dessert with stovetop oatmeal to make a delicious, hearty breakfast that’s full of goodness too.

For many months my toddler son’s breakfast has been one of two things – peanut butter toast or pancakes. The pancakes have been not just any pancakes but generally carrot and apple which I have somehow failed to share with you (will try to remember to correct that at some point, but they’re along the same lines as my beet and pear pancakes).

I admit I enjoy them too, but as it has started to get colder, and as I have been needing more calories thanks to the little guzzler getting his through me, I have been having cravings for oatmeal instead. Thankfully my son has finally decided to try it and now it has become a regular breakfast I make for both of us.

What is carrot halwa?

Carrot halwa is an Indian dessert made by slowly cooking grated carrots in milk with a bit of cardamon to infuse the mixture until the milk condenses around the softened carrot. The milk and carrot both become slightly sweet and are then finished off with a little sugar to bring out the sweetness, and often some ground almonds as well.

I quite often cook oatmeal with some grated apple and cinnamon mixed in, but other times I like to mix it up and this is one such variation. It combines that tasty dessert with oatmeal to make for a delicious, hearty and healthy breakfast treat.

How to make carrot halwa oatmeal

True, it take a little longer to cook than your typical stovetop oatmeal (as in my banana oatmeal) since you want to make sure the carrots soften and you use a bit more milk than you would with plain oatmeal that needs to condense a bit more , but it is still quicker than making a fully-fledged carrot halwa which can take quite a while (true, that’s partly because you do larger quantities most of the time – here I’ve stuck to a single serving size).

It’s worth it, though, as the end result is smooth and has a more complex flavor than your usual oatmeal but without adding in lots of sweeteners etc – it’s naturally healthy but you would hardly know it. While I have yet to try either myself, this would work making a larger batch and heating it up as you need it, and is an ideal contender for the slow cooker which make it even more practical for busy mornings.

Overall this carrot halwa oatmeal makes for a delicious, hearty breakfast that’s easy to make and good for you too. It has subtle flavors but very tasty ones, and being so healthy, you can happily make it again soon, guilt-free.

Try these other oaty breakfasts:

A cross between the Indian dessert halwa and your typical stovetop oatmeal, this is a creamy, hearty tasty bowlful.