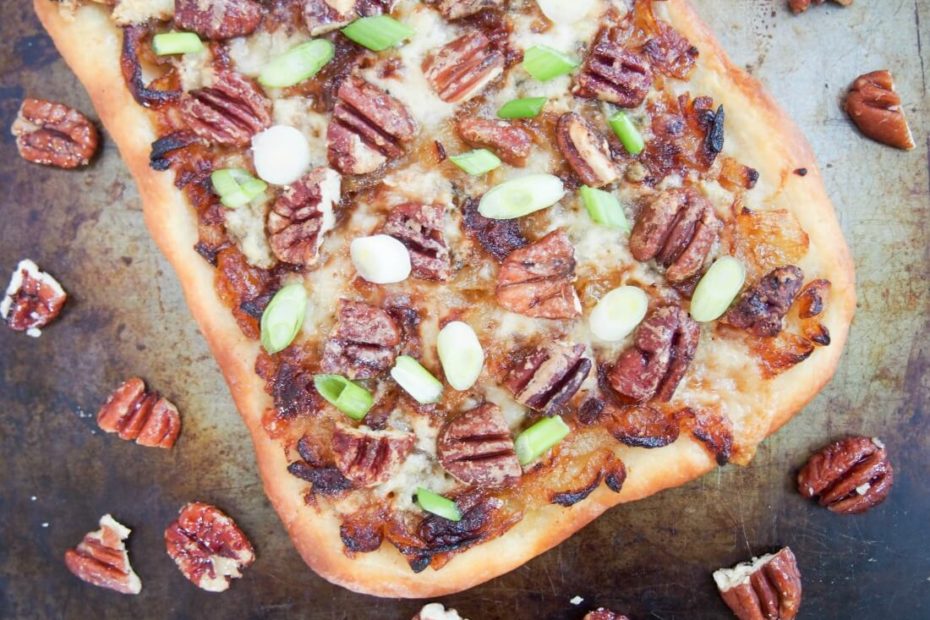 This caramelized onion and gorgonzola pizza is not exactly your typical slice, but if you’re a gorgonzola and pecan fan, you’re sure to love it. Comforting flavors, so delicious.

There’s a restaurant not too far from us that primarily sells pizza. I would call it a pizzeria, but style-wise it doesn’t quite fit what you might expect, it’s a bit more modern. Plus, it does use the wood oven for other things like a truly delicious roast chicken and skillet cookies (thankfully, I am often too full for dessert or they could be dangerous!).

We have tried most of the pizzas on the menu over the years, and recently I noticed one that I would have now and then had gone. Which naturally meant I had to make a version at home.

They had served a caramelized onion and gorgonzola pizza with walnuts which I had always liked, although between pregnancy and sharing with the kids, I didn’t have it all that often. I know some other friends who used to live here had liked it too. But I guess it wasn’t overall that popular that it has now fallen off the menu.

Maybe this blue cheese and onion mix is ​​just not quite your classic pizza fare, but it is so definitely worth a try. And now you, like I, can enjoy it at home.

For my take on it, while I like walnuts I think lightly candied pecans work better for my taste. Don’t worry about these being overly sweet, though. They are the healthier take that I used in my pear gorgonzola salad as well as more recently in my strawberry spinach feta salad that use only a little bit of maple syrup. They fit in perfectly in this unusual but tasty pizza.

How to make this caramelized onion and gorgonzola pizza

There’s a little bit of preparation for this pizza, but none of it is difficult and it is completely worth it. Plus, you can caramelize the onions and make the candied pecans while the pizza dough is rising, if you make your own, or make them ahead.

Then, spread out your dough, layer on your onions, topped with some gorgonzola and bake. Add the pecans part way through, then give it a few more minutes. Top with some thinly sliced ​​spring onions and serve. I’ve made this as smaller, individual pizzas (more like a flatbread), which are also perfect for slicing up as an appetizer, but you can make this as a large pizza as well.

This caramelized onion and gorgonzola pizza might not be the prettiest slice, but it’s packed with delicious flavors. Cheese, squidgy, and with a gently sweet crunch on top, it’s an addictively good combination.

Try these other pizza ideas:

This onion gorgonzola pizza might not be your typical slice, but it’s packed with delicious flavor.

For the pizza base

As ready to cook

Not prep time doesn’t include rising time, but some of it will be spend preparing/cooking topping.