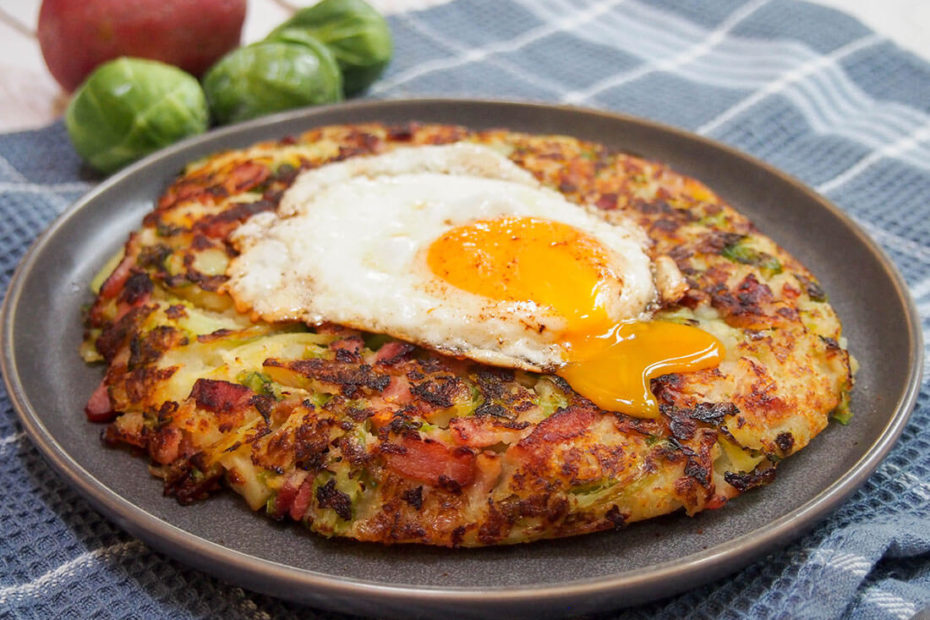 If you’re unfamiliar with bubble and squeak, food is probably not the first thing you’d think of from the name. But this traditional British dish is the perfect way to use leftover vegetables and so easy, comforting and delicious, it’s one to get to know!

Even as a Brit, I found many British foods had strange names when I was growing up. Spotted dick, toad in the hole and Yorkshire pudding (which is savory), to name a few, all seemed oddly unrelated to what they actually were. Then there was bubble and squeak, too.

It isn’t a dish I grew up with, as it’s more English and seen less in Scotland. However it’s one I have come to appreciate.

What is bubble and squeak?

The origins of the name are unclear, and the exact ingredients of this dish can vary greatly as well. Some believe the name “bubble and squeak” comes from the bubbling up and noise as the vegetables are cooking over the fire. It’s probably as good an explanation as any!

However what is clear, is that this dish is fried leftover vegetables. It is typically a way of using leftovers after a traditional Sunday roast dinner, or Christmas dinner. Since both of these would pretty much always include potatoes, that’s the one ingredient that is consistent.

Mashed potato acts as the ‘glue’ for the other ingredients. Those can be cooked cabbage, Brussels sprouts or sometimes carrots and/or peas. Many versions add some meat as well, whether that’s leftover roast or some bacon cooked in the pan before you add the rest.

Personally I’m a big fan of bacon in there both for the little bit of meatiness, as well as the flavor that really spreads through the dish.

What distinguishes bubble and squeak?

There are, of course, many ways to use leftover vegetables, and so you may be wondering what makes this dish special. Especially since I say that there are a number of variations in the ingredients.

The answer is that in bubble and squeak, the vegetables are always fried. Then, you need to leave things alone to cook long enough to get a bit browned and crispy. Don’t be too quick to turn it, you want to get nice crispy bits in there.

In many cases, you make this as one large cake in a small to medium skillet, but you can also make smaller patties. If you cook it all as one, you typically stir things as you go to warm it all through before then pressing it down to crisp up on the bottom. If you form patties, you leave them so they don’t fall apart then flip once browned.

Other similar dishes from the region

In case you are thinking this dish looks a bit familiar, just not with this name, that’s quite possible. This dish is very typical in England, but is similar to other dishes popular in Ireland and Scotland.

Probably the best known is colcannon from Ireland, which is a popular side to corned beef for a St Patrick’s Day meal, particularly in the United States. It is still relatively popular in Ireland, again particularly as a way to use up leftovers. Colcannon is made with mashed potatoes and cabbage or kale, as well as typically leeks, but unlike bubble and squeak, it’s much creamier in texture.

The Scottish dish most like this is called rumbledethumps, again made with mashed potatoes and usually cabbage or kale and onion. Swede can also be added, which is a common vegetable in Scotland (although less popular now). Rumbledethumps is generally made as a casserole so that the top crisps up.

Another popular ways to use leftover potatoes are to make potato pancakes/scones or potato farl as they are known in Scotland. These make a great component to a traditional fried breakfast (alongside bacon, sausages, fried tomato and egg).

When would you typically eat bubble and squeak?

This dish can be served as a hearty breakfast, often topped with an egg. Alternatively, it can be a main meal in itself or served as a side to some leftover roast meat.

Since a roast dinner (often involving roast beef or lamb alongside roast or mashed potatoes and other vegetables) is common on Sundays in England, this dish was a classic Monday meal. It’s also something many associate with Boxing Day to use up leftover Christmas dinner.

In the UK, a traditional Christmas meal is very similar to an American Thanksgiving meal. You typically serve turkey with potatoes, most commonly roasted, one or more stuffings and Brussels sprouts.

Bubble and squeak is a tasty, hearty dish that’s a great way to use up leftovers. It’s also so versatile in when you serve it and what exactly goes in. So give it a try, and adapt it often!

Try these other hearty brunch (or anytime) ideas:

The perfect way to use up leftover veg, bubble and squeak is packed with flavor and so easy to make.

Services: 2 if served as breakfast/brunch or side with eg leftover roast, 1 as a main in itself

Note: if you don’t have ready-cooked Brussels sprouts, you can cook them quickly in the microwave. Just trim base, remove outer layer, cut in half and put all pieces in a microwavable container with a little water. They should cook in around 2 minutes on high. You can use ready mashed, boiled, baked or roasted potatoes for this. Just trim off any overly crisp parts and skin then mash up.

I first shared the post for Bubble and squeak (British potato cakes) on Curious Cuisiniere where I am a contributor.