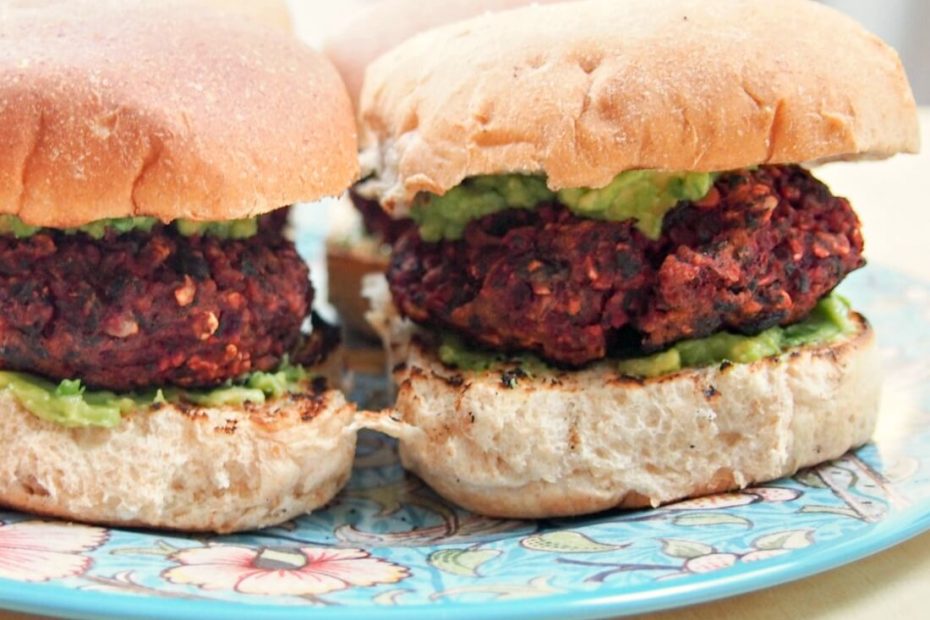 This delicious beet and black bean burger is hearty and delicious. Naturally vegetarian and gluten-free, it’ll be enjoyed by all.

So tomorrow is 4th July (I know, my pregnant-fuzz brain can still read a calendar!) and I know for many that means cookouts, red, white and blue anything (what about this yummy dessert?) and watching the fireworks, or in our case hoping the fireworks don’t scare our toddler too much.

Well, I thought in the spirit of equality I would share this beet and black bean burger, which is both vegetarian and gluten-free, to make sure almost everyone has something to eat and enjoy. It’s heartily ‘meaty’ (if that’s PC enough to say) and really tasty, and it’s even a beautiful red color – I just couldn’t bring myself to color the guacamole blue that we put with it to make it fully fitting. But either way it’s good enough to be enjoyed by meat eaters and vegetarians alike.

This beet and black bean burger came about after our BBQ on Memorial Day where we had a vegetarian friend over. As we were planning what to make, we debated about making some vegetarian burgers rather than him bring his own box, as had been the case before. Store-bought are fine to a point, but when we had so much other delicious homemade food it seemed a shame that was the one thing we hadn’t put the effort into. I vowed to experiment to make a decent homemade burger that he could have next time, and I think this is it.

I scoured various recipes and took inspiration from a few, particularly this one in terms of technique preparing the beet and mushroom, to come up with something that I felt would have good flavor and texture without being overly complicated. Beetroot and black beans felt like a great basis for something that feels like a proper burger, that just happens to be vegetarian, which is what I was going for.

How to make these beet and black bean burgers

I’ll be honest, you have a little bit of preparation for these. Plus, using the oven might be the last thing you want to do when it’s warm (at least in my house). However, it’s not on for long and I’m afraid it is really the only way I can think to both pre-cook and dry out the mushrooms and beetroot. Doing this really helps both the overall consistency and flavor of the end burger.

After that, though, it’s simply a case of throwing everything in the food processor, mixing until combined and then forming your burgers. Cooking them on the grill is a breeze. It’s worth leaving them to cool a little while before you cook them to help them hold together and not stick. I left them around two hours and they held together really well. In fact, I’d say these held together better than many store-bought ones I have seen and as good as meat burgers.

I did debate about leaving out the egg so they are also vegan, as the consistency was pretty good they probably would have held together OK, but I was a little nervous in case they disintegrated when they met the grill. Now I’ve tried them with egg, though, I’ll try to be brave and give it a go without, or replace with some flaxseed meal and let you know how it goes, assuming I remember.

In the meantime, though, I hope you’ll give these delicious beet and black bean burgers a try. We enjoyed them with some homemade guacamole which was a great match. I’d originally thought the burgers might be a bit dry so the guacamole would balance that out. When thankfully that wasn’t the case, it was a lucky discovery that the flavor worked so well too. I think they’d also be good with a mix of guacamole and the chipotle cream I made for tacos, if you want to spice it up a bit.

Dress them up or down as you like, they’re definitely worth enjoying some time over grilling season. I will definitely be making them again for ours.

Try these other twists on burgers:

If you thought veggie burgers were boring, think again – these are moist, flavorful and meaty enough to convert the biggest carnivore.